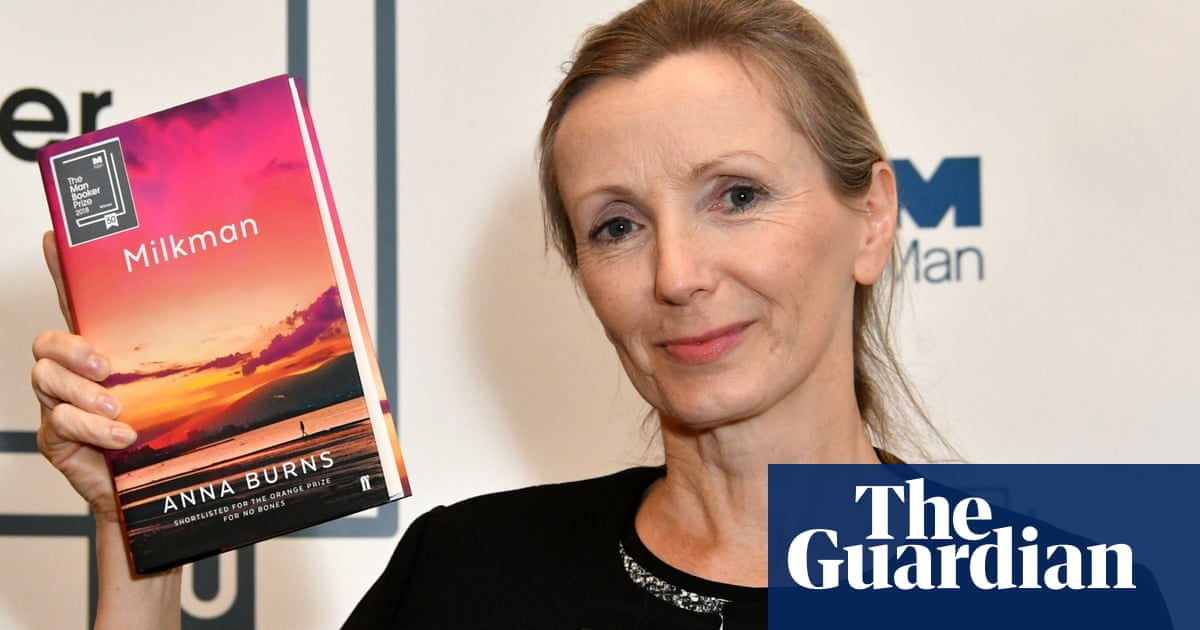 Anna Burns has become the first Northern Irish author to win the Man Booker prize, taking the 50,000 award for Milkman, her timely, Troubles-set novel about a young woman being sexually harassed by a powerful man.

The experimental novel, Burnss third, is narrated by an unnamed 18-year-old girl, known as middle sister, who is being pursued by a much older paramilitary figure, the milkman. It is incredibly original, according to the Bookers chair of judges, the philosopher Kwame Anthony Appiah.

None of us has ever read anything like this before, said Appiah, announcing the win at a dinner at Londons Guildhall. Anna Burnss utterly distinctive voice challenges conventional thinking and form in surprising and immersive prose. It is a story of brutality, sexual encroachment and resistance threaded with mordant humour.

Written in lengthy blocks of paragraphs, eschewing character names for descriptions, Appiah admitted that Milkman could be seen as challenging, but in the way a walk up Snowdon is challenging. It is definitely worth it because the view is terrific when you get to the top, he said. I spend my time reading articles in the Journal of Philosophy so by my standards this is not too hard. And it is enormously rewarding if you persist with it. Because of the flow of the language and the fact some of the language is unfamiliar, it is not a light read [but] I think it is going to last.

As the award was announced, Burns was lost for words. At the press conference afterwards, the 56-year-old author said her job as a novelist was to show up and be present and attend. Its a waiting process. She just had to wait for my characters to tell me their stories.

Asked about how she had filled the long gap since her 2002 Orange prize listing for No Bones, she said she had done commercial events and moved houses. What will she do with the money? Ill clear my debts and live on whats left.

The win makes Burns the first Northern Irish winner previous Irish winners, including John Banville, Anne Enright and Roddy Doyle, all come from the republic. It also makes her the first female winner since 2012, when Hilary Mantel took the award with Bring Up the Bodies.

Burns beat writers including American literary heavyweight Richard Powers, Daisy Johnson, at 27 the youngest author ever to be shortlisted for the award, and Canadian Esi Edugyan. According to Appiah, the judges, picking from a shortlist that delved into some dark themes, were unanimous in their choice of winner and not influenced by concerns that picking a third American winner in a row could cause controversy.

I dont know whose milkman he was. He wasnt our milkman. I dont think he was anybodys. He didnt take milk orders. There was no milk about him. He didnt ever deliver milk.

Appiah said: This woman living in a divided society is harassed by a man who is sexually interested in her. He is taking advantage of the divisions in society to use the power he has because of the divisions, to go after her. Sectarianism and divisions in Ireland play an enormous role in the novel [but] Northern Ireland is not the only place in the world with a divided society TS Eliot said you cant be universal without being particular, and this is particular but brilliantly universal as well.

Milkman also spoke to the concerns of today, he said. I think this novel will help people think about #MeToo … It is to be commended for giving us a deep and subtle and morally and intellectually challenging picture of what #MeToo is about.

Appiah added that Burnss narrator, a girl who reads as she walks (This would be a 19th-century book because I did not like the 20th century), has an extraordinary voice.

She is sustained by her own good sense, by her humour and by her reading. She is a literary person in a rather unliterary society, said Appiah, who was joined on the judging panel by the crime writer Val McDermid, the critic Leo Robson, the feminist writer Jacqueline Rose, and the artist and graphic novelist Leanne Shapton.

Burns, who has previously been shortlisted for the Orange prize, revealed in the Guardian last week that Milkman has its origins in a few hundred words that were superfluous in a novel I was currently writing. She tried to craft a short story from them, and they turned into Milkman.

The book didnt work with names. It lost power and atmosphere and turned into a lesser or perhaps just a different book. In the early days I tried out names a few times, but the book wouldnt stand for it. The narrative would become heavy and lifeless and refuse to move on until I took them out again. Sometimes the book threw them out itself, she said.