The Myers-Briggs Type Indicator is used by firms worldwide to test their employees. In her new book, academic Merve Emre looks at the systems curious origins 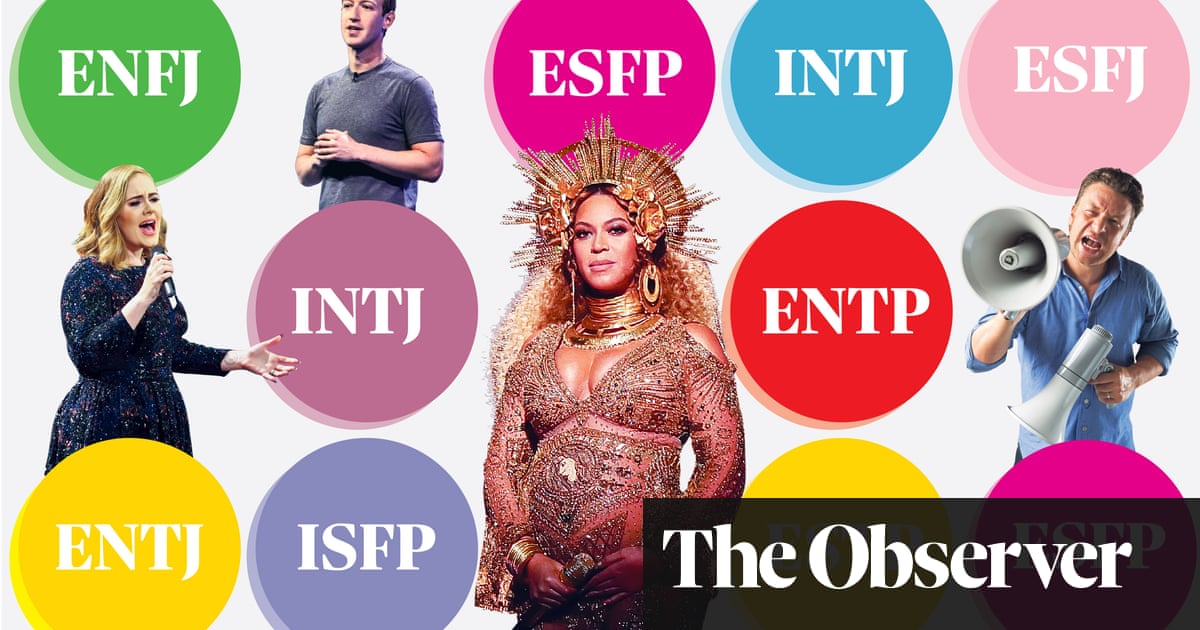 Merve Emre was 22 when she found out she was an ENTJ, though she was yet to understand what an impact it would have on her life.

Emre had recently graduated from Harvard University and was working as an associate consultant at Bain & Company, one of the big three management consultants. Two weeks in, she and the rest of her intake went to a luxurious offsite facility. Here a career counsellor told them to work through an instrument decidedly not a test called the Myers-Briggs Type Indicator. The MBTI is the worlds dominant personality questionnaire: more than 50 million people around the globe are estimated to have taken it. It has been administered since the 1940s (though its origins date to 1917) and now consists of 93 questions to which you answer A or B. At the end, you are assigned one of 16 different types. Many consider this score to be meaningless, no more scientifically valid than your star sign. But others including companies such as Bain, the BBC and many universities clearly do not.

The indicator found Emre to be more extrovert (E) than introvert (I), inclined to use intuition (N) over sensing (S), thinking (T) more than feeling (F), and prone to judging (J) rather than perceiving (P). Hence ENTJ. The counsellor gave those letters some context for Emre and she recalls finding the questionnaire both rewarding and revealing. I remember being utterly fascinated by it, she says. Id never before encountered what seemed to me then like a relatively rigorous language for thinking about why I was the way that I was. And for feeling really proud about the way that I was.

No one type is better than another. The creators of the MBTI two American women, Katharine Cook Briggs and her daughter, Isabel Briggs Myers imagined it as primarily a tool for self-discovery. But that doesnt mean all types are equal. ENTJs, the classification Emre scored, have gained notoriety as the CEO type. Donald Trump is said to be one, as is everyone from Hitler to Margaret Thatcher, Bill Gates to George Clooney. The MBTI defines them as: Frank, decisive, assume leadership readily. Quickly see illogical and inefficient procedures and policies, develop and implement comprehensive systems to solve organisational problems.

I was completely seduced by it, says Emre. This was in part because I was working at a large, prestigious corporation and I was being told that my personality made me very suitable for becoming a leader in this corporate behemoth. She laughs. At 22 there was something attractive about that.

So, did Emre rise as fast and smoothly at Bain & Company as her Myers-Briggs type might have projected then? Oh no, I was a terrible consultant, she replies. I was really bad at my job! Nine months after I took the indicator, I decided I wanted to go to graduate school and I got a PhD in literature. Yeah, its really funny to think that it made me better qualified to do anything. What did I know about business at all? I spent all of college reading novels.

That was a decade ago. Today, Emre is a 33-year-old associate professor of English at the University of Oxford. She has swapped the corporate world for a cosy, book-lined office just off the main quadrangle of Worcester College. She has given up unlimited bagels and barista coffee for Nicholas Hawksmoor-designed buildings and award-winning gardens that have their own blog. This afternoon, as the sun shines and windfall pears dot the orchard floor, it doesnt seem like a terrible trade.

After leaving Bain, Emre didnt reflect much on the MBTI. She did her graduate studies at Yale University, became an assistant professor at McGill University in Montreal, and wrote a book, Paraliterary, about bad readers who view fiction and poetry as mere entertainment or distraction. She started to research a second book about the relationship between character and personality in literature and this was when she began to reconsider her own experience with the Myers-Briggs indicator.

I found out first that it had been designed by two women, which I found fascinating because, like many of my readers, Id always assumed it was two men, says Emre. She made contact with the Myers & Briggs Foundation to see if she could gain access to the archives of Isabel Briggs Myers, the daughter, who had died in 1980. For almost a year, the foundation made her jump through hoops: she had lunch with the vice president in New York; she spent $2,095 on a week-long certification programme that made her qualified to administer the MBTI. But eventually, a librarian told her that the foundation would never allow her access to the papers.

Clearly, they underestimated the determination of an ENTJ, and the result is an engrossing new book, Whats Your Type? The Strange History of Myers-Briggs and the Birth of Personality Testing. They didnt realise that Im the type of person who when denied access will not say Well, Im just not going to write this book but that Ill figure out how to write this book without that particular source, says Emre.

Emre says that by the time she pitched the book to publishers, she was just so ready to write a takedown of the Myers-Briggs indicator. But Whats Your Type? isnt that. The easy thing would have been to tell a story about these two women who wanted to make a quick buck and sold this indicator to a bunch of men who then used this indicator to exploit their workers, she says. But that isnt really the story here.

The deeper story, Emre found, began with Katharine Cook Briggs who became besotted with the ideas of Carl Jung, the Swiss psychoanalyst. When her daughter Isabel was born in 1897, she turned their living room into a cosmic laboratory of baby training, conducting experiments and drills that would eventually form the basis of a notebook called The Diary of an Obedience-Curiosity Mother. Katharine was responsible for the A-or-B question format, but her main concern was in finding out what conditions best allowed children to develop into civilised adults. Decades later, Isabel realised that an adapted questionnaire could become a people sorting device, one that could easily be transposed from children to organising a workforce.

There is clearly an insidious idea here, or at least the potential for one, as the Myers-Briggs indicator found mainstream acceptance from the 1980s onwards. Certainly it can make individuals seem disposable, just cogs in the machine. Still, Emre believes that Katharine and Isabel were fundamentally well meaning. I think they truly believed they could figure out a way to make people happy, she says. They believed that as mothers that was what they had been trained to learn how to do: to try to keep many different people with conflicting desires and conflicting preferences happy under one roof. And their ultimate endgame was happiness but then also productivity.

Whats really interesting about the indicator is that it actually preempts a lot of the more contemporary corporate happiness movements. The moves towards self-care and corporate psychology and the rise of creativity these women were speaking that language long before it became an ambient reality of our world.

Attitudes towards the Myers-Briggs indicator have varied over the years. In its early incarnation, especially the 1950s and 1960s, it was deemed more desirable to be an introvert. There was something very suspicious about the extrovert, Emre notes. The extrovert is the people-pleaser, the social man, the superficial one. And the introvert is the serious, creative intellectual who commands respect because he or she will not change herself to meet the demands of others.

This flipped in the 1970s, Emre thinks, and since then weve lived in the age of the extroverts. She says: Despite the fact that introverts are being summoned by someone like Susan Cain [in her book Quiet], there still is a really strong bias towards extroversion. Towards a person who is incredibly flexible with their personality and who can change themselves to meet the demands of any given situation. In some ways it is because thats what is utterly necessary to succeed in todays economy, right? You have to be a kind of constantly flexible labourer.

There are clearly problems, though, with reading too much into a Myers-Briggs score. Peer-reviewed scientific papers on the effectiveness of the indicator are hard to find. It is criticised for giving binary outcomes youre either extrovert or introvert and human personality is often more slippery and changeable. Moreover, one of the central tenets of the instrument is that you cant change your type: it is innate, fixed from birth. Yet the company that now publishes the MBTI concedes that half of subjects change at least one of their four types when they answer the questions a second time.

For Emre, that the Myers-Briggs indictor lacks scientific rigour almost misses the point. Likewise the fact that it is parodied by online clickbait such as the BuzzFeed quiz, which asks random questions and then tells you which character you are from, say, Game of Thrones or Succession. The Myers-Briggs indicator is entrenched now: the perfect tool for the Century of the Self and beyond. I dont really see it going away, says Emre. I mean, its really survived attack after attack.

Certainly, when you know about Myers-Briggs, you start to notice those strange clumps of four letters everywhere. They are common on dating profiles and there is a resilient idea that if you share the same type as someone else you are more likely to bond (or, if they are very different, that youll be at each others throats). On Twitter, someone contacted JK Rowling and suggested that, as fellow INFPs, they should be friends. The author replied that she was actually an INFJ: conscientious and committed to their firm values, in the Myers-Briggs argot. But she went on, That doesnt mean we cant be buddies, though.

As were packing up, I mention to Emre that Ive never taken the MBTI. Lets just do it right now, she says. She grabs a pen, and for the next 20 minutes were discussing introversion versus extroversion, logic or gut instinct, how much I allow my heart to rule my head and vice versa. At times Myers-Briggs can be confusing for example, Im not sure why the indicator makes me decide if Id rather be competent or compassionate but it does make you think about your social interactions, how you take decisions and why you are how you are.

When we finish, Emre has four letters scribbled on her hand: ISTJ. Later, I will look up the Myers-Briggs definition. Quiet, serious, earn success through thoroughness and dependability, it reads. Decide logically what should be done and work toward it steadily, regardless of distractions.

I wouldnt vehemently disagree with that assessment, even if Id like to feel its a little reductive. And of course my first instinct is to find out which celebrities this links me to. Emre pulls out her laptop: Queen Elizabeth II, she chuckles. Jeff Bezos, Sigmund Freud, Jean-Claude Van Damme.

Not ideal, I note, but not Hitler. George HW Bush, Thomas Hobbes, Emre continues. Oh, you have some nasty, brutish people in your corner, too. Anyway, thats something for you to chew on on your train ride home.

Whats Your Type: The Strange History of Myers-Briggs and the Birth of Personality Testing by Merve Emre is published by HarperCollins (20). To order a copy for 17 go to guardianbookshop.com or call 0330 333 6846. Free UK p&p over 10, online orders only. Phone orders min. p&p of 1.99.